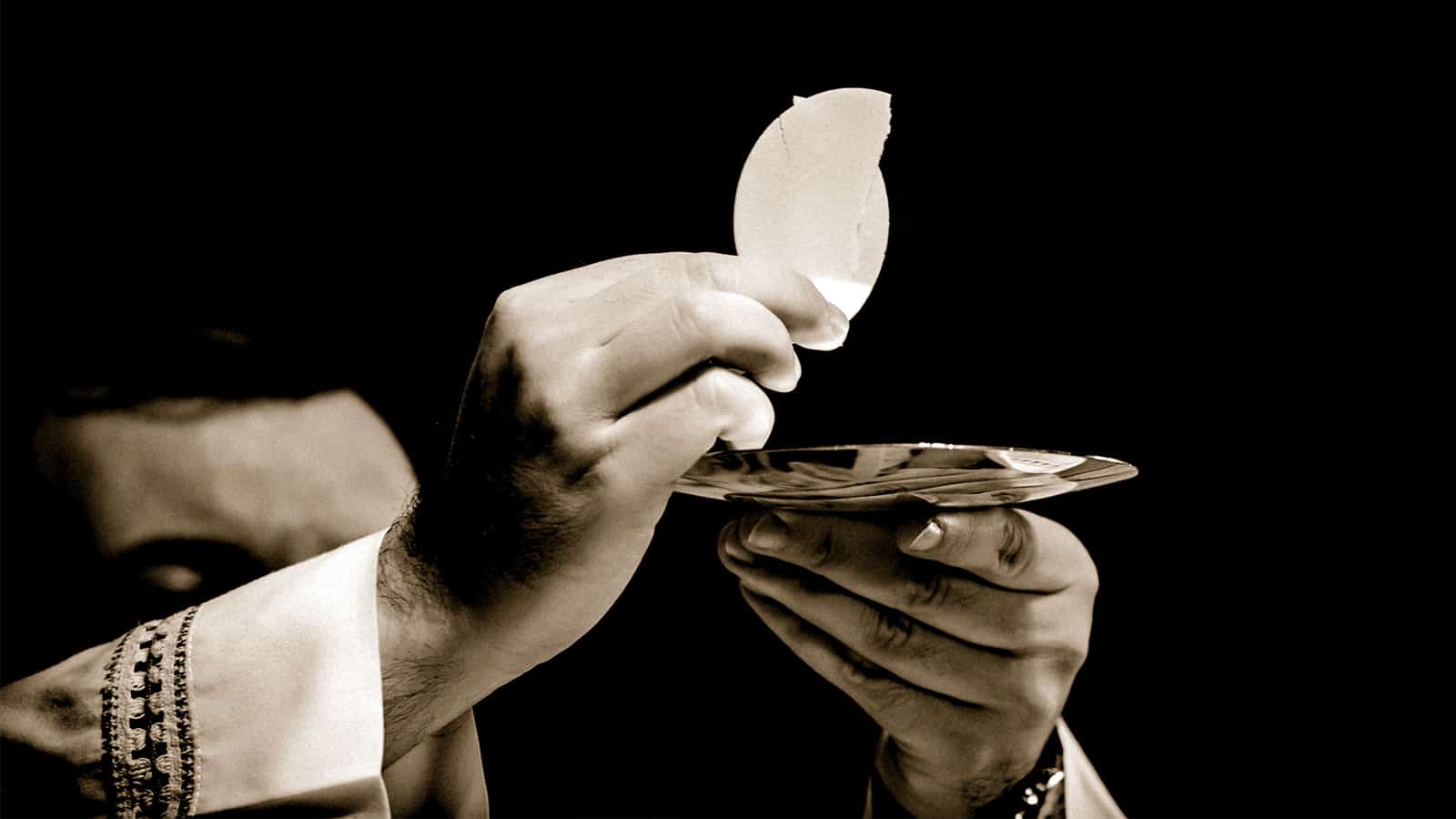 This episode is titled “The Eucharistic Controversy.”

As we round out the Middle Ages in Europe, we have several topics we need to cover before we launch into the Era of Scholasticism. Last time we took a brief look at the Investiture Controversy and an even briefer look at a doctrinal error that had a long lifespan and several flavors – Adoptionism.

Now we’ll consider another controversy that raged in the church of both East and West for a long time; how to understand the presence of Christ in the Eucharist.

For Protestant listeners, the issue was; What do we mean when we say Jesus is present at Communion or the Lord’s Supper.

I need to begin by making clear à This is not an attempt to expand on ALL the various theories of the Eucharist. That’s a discussion way beyond my ability. It took me a while to compose this episode because I had to work out exactly how to phrase things. Words are the tools theologians work with. Those words carry precise meanings. But we’re dealing with multiple languages; typically, Greek and Latin. And once the ancient theologians worked out some theological formula over decades, and in some cases, centuries, picking just the right words to express truth, then refining those words, as problems with their earlier choices became clear, then we have to find words in English to accurately translate those. THEN, we face the problem of people pouring different meanings into those words.

So, if I get some of this less than totally accurate or clear, I beg your forgiveness ahead of time. I’m no Sheldon Cooper. Just a little guy with a pea-brain.

The Eucharistic Controversy owes its origin to the tension between the Bible’s call to worship God in Spirit and truth, and the desire to have something tangible to venerate and make focus attention on. The use and veneration of icons in the East had a correlation in the West with the elevation of the Communion elements.

While Christians had long discussed the true nature of the elements of Communion, the real controversy got under way in the mid-9th C by a Frankish monk named Paschasius Radbertus. In 831, he published a book titled On the Body and Blood of the Lord; the first complete treatise on the Eucharist.

The most significant part of Radbertus’ work was his insistence that the elements were the  REAL, corporeal, body and blood of Jesus.

Let me back up: All Christians believed Jesus was present at Communion. Jesus said, “When two or three of you are gathered in My Name, I’m there in your midst.” Communion was just that; a time for Christians to gather in a special way together IN CHRIST. So when they passed round the bread and wine, they regarded it as a holy moment when the Spirit of God mediated the Person of Jesus in a uniquely way. Simply stated, Jesus was present in Communion.

But, people understood that presence in different ways. Augustine, with his massive influence on Medieval theology, said Jesus was spiritually present at Communion, but not physically. His presence was a mystery to be acknowledged by faith. Cyril of Alexandria and John of Damascus said Jesus was bodily present in the Eucharist, but they meant His resurrection body, which was spiritual, not corporeal. So for them Christ’s presence in the Eucharist was also a mystery.

Radbertus now proposed that the elements of Communion became the literal flesh and blood of Jesus. They were the same stuff as the body born to Mary, as he put it. Phenomenologically, they didn’t look or taste like flesh and blood because that would have been too much for people to deal with, so God graciously allowed the bread and wine to retain their outward properties, but in reality, WERE Jesus’ body and blood. Radbertus said it was in the act of partaking the Eucharist that eternal life was maintained and nurtured. They were the “medicine of immortality.”

The elements became Jesus’ body and blood, not by an act of creation but of transformation.

This raised the question: If the Eucharist is the real body and blood of Christ, do unbelievers who partake of the elements chew Christ. Radbertus denied it; saying while the elements were the corporeal body of Jesus, they still had to be taken by faith. So while unbelievers might participate in the sacrament, they didn’t in fact partake of Christ.

Radbertus got around the lack of correspondence between the reality of Jesus’ bodily presence and its appearance as bread by saying God allowed this to make sure when the elements were taken, they were done so by faith; so their spiritual benefit could accrue to the partaker. So, the bread and wine were made over as symbols once again, which moved back toward Augustine’s position, the very thing Radbertus had set out to undo.

Hrbanus Maurus, abbot of Fulda, detested Radbertus’ ideas. He denounced any view of the Eucharist that made it a materialistic manifestation of Jesus’ body. Maurus said the value of Communion lay in the communicant’s faith, not in a piece of bread or drop of wine.

Gottschalk, who we’ll come back to later, agreed with Radbertus and said the Eucharist WAS Jesus’ body and blood. But he refused to take it as far as Radbertus, who said every time Communion was celebrated, it was a fresh sacrifice of Christ, a re-crucifying.

This is where we need take a closer look at how the early church understood Communion. The ante-Nicean Fathers, that is, those church leaders before the Council of Nicaea in 325, referred to the Lords’ Table, Communion, the Eucharist, whatever you want to call it, as a commemoration of Christ sacrifice. They linked it to the Last Supper where Jesus made it an ordinance for His followers. He said, “Do this in remembrance of Me.” That’s the way the Apostles passed it on, as a commemorative moment to reflect on Christ’s sacrifice on the Cross when his Body was broken and His blood was shed. The value of Communion was the spiritual link forged between follower and their rabbi through this remembering as they were reconnected in a specific and tangible way to what Jesus did for them.

Later Christians moved away from this commemorative core of Communion to a more mystical view of Communion. And since mystery craves expression, it’s inevitable someone made the elements of Communion more than mere symbols. Then to say each time they were transformed into the corporeal body of Christ, it wasn’t just a commemoration of His sacrifice, it was a fresh sacrifice.

Radbertus was the abbot of a monastery in Corbie. King Charles the Bald asked one of his fellow monks, Ratramnus, to evaluate his abbot’s work. Ratramnus effectively agreed with Radbertus, but denied that a miracle of transformation took place with the elements. Ratramnus said communicants do indeed partake of Jesus’ body and blood. But they do so by faith, rather than by the elements being mystically transmuted into the corporeal body of the man born by Mary.

The Eucharistic Controversy of the 9th C opened a door that eventually brought about a new understanding of faith, grace and even the Church. Radbertus’ ideas eventually triumphed in the Roman Church because he set them forth in a clear way for an age that ached for assurance of salvation. Now there was a tangible way to be assured people were doing something that maintained and nurtured immortality. His ideas prevailed as well, because his opponents’ arguments were vague, complex, and frankly, not as appealing.

Radbertus also laid the ground for a paradigm shift in the ministry of the clergy and Church. With a growing emphasis on the fresh sacrifice of the Mass, a bodily presence of Christ provided the rationale for a shift in Christian devotion from its original base in the Word and Faith, to a religious life that centered on the new reality offered in a sacrament. To put it bluntly, interest shifted from what Christ did at the Cross, to what the priest does with Christ in the elements. Jesus began to morph in people’s minds from the Victorious Savior to the Eternal Victim – offered continually in the Mass.

While Radbertus’ view eventually became the majority view in the Latin West, it was never without those who rejected it and clung to a more Augustinian view. And of course, how to understand the Eucharist will re-emerge among the Reformers and see Round 2 in some pretty contentious disputes.

But, that’s the subject for a later episode.